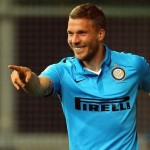 The Express & Star reported that West Brom are on the trail of World Cup winner and out-of-favour Arsenal striker Podolski, for what could be a cut-price transfer.

The Baggies are one of three Premier League clubs interested alongside Newcastle United and Sunderland, while German side Cologne are also keen.

Every game for Arsenal now is a “cup final” – Ramsey