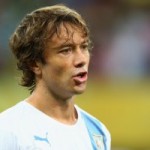 The 32-year-old Uruguay international defender who spent part of last season on loan at Malaga, said he has agreed a two-year deal at the Hawthorns, with the deal confirmed by the French champions.

Lugano wrote on his Twitter account : “I am very please to join West Bromwich Albion for the next two years,”.

He joined PSG in 2011 but his time in the French capital was interrupted by injuries.

After making 12 league appearances in his first season, he was pushed further down the pecking order by the arrival of the likes of Thiago Silva as PSG began to spend big, and he joined Malaga on loan in January this year.

“I’m doing something that has been missing in my career, playing in the Premier League, without doubt the most beautiful and competitive league in the world,” Lugano added.

“The challenge is to match what West Bromwich achieved last season and trying to go a step further to reach European competitions.”

PSG have further added to their defensive ranks this summer with the 32million euro (B£27.8million) signing of 19-year-old Brazilian Marquinhos from Roma, making Lugano expendable.

“Paris Saint-Germain thanks Lugano for the professionalism he has shown throughout his contract and wishes him well in the English league,” the club said in a statement.