It has been reported that West Brom have managed talk down Manchester United’s price for Jonny Evans. 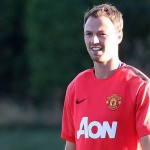 The Daily Mail says Tony Pulis has hailed Evans as a ‘great signing’ and is now ready to sanction the departure of Joleon Lescott in a deal worth up to £2million.

Pulis will allow Lescott, 33, to head across Birmingham to join Villa, with Tim Sherwood keen to recruit experience for his backline.