Reports are out claiming that West Brom are set to take Arsenal winger Serge Gnabry on-loan. 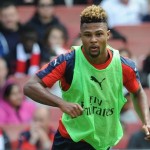 The Daily Mail reported that he is expected to join on loan until January with an option to extend his stay with the Baggies until the end of the season.

Gnabry arrived at Arsenal from German side Stuttgart in a £100,000 deal back in 2011 and quickly progressed to the reserve side.

He was handed a first-team debut in Arsenal’s League Cup tie with Coventry City in September 2012, coming on for Alex Oxlade-Chamberlain with 20 minutes to play.