Reports are out claiming that West Bromwich Albion chairman Jeremy Peace has declared that the club has no intention of selling Saido Berahino. 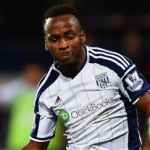 The 21-year old England U21 international striker is attracting interest from the likes of Manchester United, Liverpool and Tottenham following a strong start to the 2014/15 Premier League season but Peace says the Baggies are not looking to offload the talented youngster.

“I wish to assure our supporters that Saido Berahino will not be going anywhere in January or, I hope, next summer,” read a statement released by Peace on the club’s official website.

“It is not in our minds at all to trade a footballer the club has worked so diligently to develop.

“He is contracted to play for West Bromwich Albion until at least the summer of 2017 and we are happy to sit down with him and discuss extending that commitment on terms which recognise his continuing improvement as a footballer and his growing importance to our own plans.

“We have begun that process by opening preliminary talks with Saido’s representatives and are delighted that this development has now taken him all the way to the senior England squad.

“This reflects proudly on our club and the efforts of all the staff who have played such a key role in Saido’s progress since he arrived here as an 11-year-old.

“However, it seems to have also generated unwarranted and excitable speculation about his future – which I wish to stress remains very firmly aligned to this football club.”

Burundi-born Berahino has scored seven goals for Albion so far this season which landed him a call-up to the England senior team for an upcoming Euro2016 qualifier against Slovenia and a friendly with Scotland.