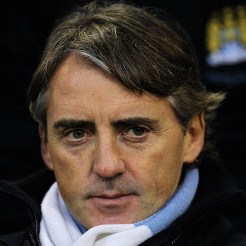 Manchester City failed to score in a Premier League fixture for the first time this season as they were held to a 0-0 draw by West Brom at the Hawthorns.

Though high-flying City had three times as many shots on target as their mid-table hosts, the draw was ultimately the fairest result in a stalemated game which came to life in the second period.

Both Jerome Thomas and Mario Balotelli struck the woodwork with spectacular drives from distance after the interval, but David Silva and Shane Long were left to rue sitters either side of the break which could have gained their side an extra two points.

West Brom now move into ninth place for the time being, albeit with several sides below them having a game in hand, while Manchester United’s 5-0 rout of Wigan brings them level on points with their fierce local rivals with only a rapidly-diminishing goal difference separating the two sides.

Micah Richards Determined To Fight For His Place At Man City