Manchester United came away with a 3-0 victory as West Brom continued their poor form. 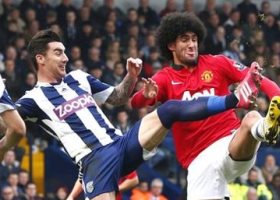 United’s first came on 34 minutes when Rafael’s won a foul from Chris Brunt on the corner of the box. Robin Van Persie curled in a fierce cross which Phil Jones headed past Ben Foster.

United then went close with Rafael, and Marouane Fellaini’s header was cleared off the line. West Brom had chances too, as Claudio Yacob and Victor Anichebe sent their efforts wide.

There were appeals from United when Foster handled outside his box to prevent a Van Persie open goal, but the linesman incorrectly ruled in Foster’s favour.

In the second half, West Brom started brightly, and Anichebe and Zoltan Gera both went close with shots to De Gea’s left. United doubled their lead on the 65th minute when Rooney headed in Rafael’s cross at the back post. As the game drew to a close, Danny Welbeck curled a shot past Foster seal the victory.