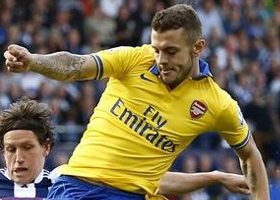 Arsenal’s Premier League encounter against West Bromwich Albion ended 1-1 which helped the Gunners move to the top of the table tied on points with Liverpool.

Jack Wilshere scored his first Premier League goal in three years to to force a 1-1 draw against West Bromwich Albion at the Hawthorns.

The England attacking midfielder saw a shot come off the boot of Jonas Olsson before speeding past home goalkeeper Boaz Myhill on 63 minutes.

It cancelled out Claudio Yacob’s opening goal for West Brom after he rose to power a header into the net from Morgan Amalfitano’s cross three minutes before half-time.