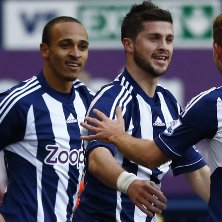 West Brom striker Peter Odemwingie made it a miserable return to the Hawthorns for Chelsea manager Roberto Di Matteo with a second-half winner to stun the Champions League holders.

The Nigerian international headed home a cross from Shane Long whose opening goal had been cancelled out by Eden Hazard.

It condemned Di Matteo, who spent two years as Albion boss, and his side to a first away Barclays Premier League defeat of the campaign.

But his former club, managed by ex-Chelsea number two Steve Clarke, are dreaming of Europe after registering a sixth win in seven home games.