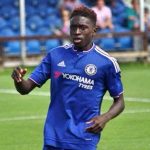 Reports are out claiming that West Ham are set to trump Arsenal for Chelsea youngster Domingos Quina.

The Mirror says the Portugal Under-17 international walked out on the Blues last month, failing to return to the club after international duty as he feared he would not be given the chance to break into the first team.

Arsenal had appeared to be leading the chase to sign the 16-year-old and had been expected to tie up a deal.

But they have been gazumped by West Ham with Quina set to sign for Slaven Bilic’s side today.