It has been reported that West Ham United boss Sam Allardyce admits they’re being blocked from immediately dealing in Lassana Diarra. 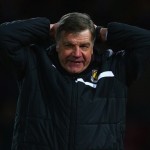 The former Arsenal and Chelsea midfielder has been training with the Hammers after leaving Lokomotiv Moscow.

“We had agreed a deal and unfortunately the FIFA regulation – that hasn’t been explained to me yet.

“There is a FIFA regulation at the moment that cannot be overcome so he will not be joining us until the end of the season,” Allardyce told Sky Sports News HQ.