Reports are out claiming that West Ham United boss Sam Allardyce hailed the fitness of matchwinner Aaron Cresswell after victory over Newcastle United. 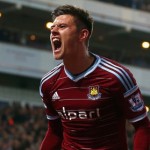 The 24 year old has risen to the Premier League in unconventional fashion – released by hometown Liverpool as a teenager before six years in the Football League, firstly with Tranmere before fellow Liverpudlian Paul Jewell snapped him up while boss at Portman Road.

“The important thing about Aaron for us is when I talk about injuries…,” Allardyce began before thumping some wood. “The game record of Cresswell is better than anyone at the club.

“He played three seasons for Ipswich at 40-plus games. He did the same for Tranmere. We only have 38 games in the Premier League. Mr Dependable, not only in terms of his performances but his reliability.”