Reports are out claiming that West Ham boss Slaven Bilic admits Saturday’s clash with Arsenal could make or break both teams’ seasons, both in terms of European qualification and title credentials. 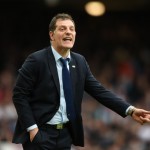 The Hammers need a victory to stay in the hunt for a place in the top four as they bid to secure Champions League football for the first time and Arsenal who still have an outside chance of clinching top spot.

“The season is approaching an end and it’s very important for them and for us. We are both fighting, either for a place in Europe or, from their point of view, they are trying to be champions.

“They still have a chance on paper, but they admit they need to win all their games.

“There’s a lot at stake. We also need points to stay in the race for the top four, five or six.”

“It’s nice to be unbeaten at home. I didn’t know it was 13 games but that just shows we approach every game as a single game,” he added.

“We know we have a good home record, that is why we are high in the table.

“Our form and our position in the table make us quite confident. That first game was ages ago but it’s nice to know that we played them this season and beat them 2-0.

“We are at home, we are confident, so it should be a great game.”