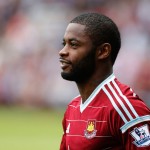 The Cameroon international has joined West Ham on-loan from Barcelona.

“One thing that Alex has is experience at two top clubs, so that’s what he can bring to us,” he told the club’s official website.

“What he achieved at Arsenal and then Barcelona can only be a good thing for us.

“That’s what we’re hoping. The professional that he is, he’ll want to do well here.”