Reports are out claiming that West Ham United are set to make a January bid for Lokomotiv Moscow striker Felipe Caicedo. 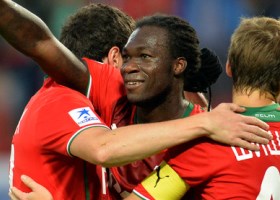 It is said that the Hammers are still desperate for a quality attacker and it is believed that they will make a move for the 25-year old Ecuador international in January.

Caicedo, who has previously played with Manchester City and FC Basel, is looking to depart Moscow where he arrived from City in 2011.