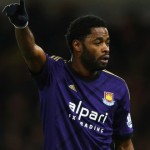 Reports are out claiming that West Ham United boss Sam Allardyce is determined to keep hold of Alex Song ahead of Liverpool.

The Hammers are desperate for the Cameroon midfielder to make his loan spell from Barcelona permanent. But Liverpool are keen to hijack that deal and land the former Arsenal man.

Allardyce said: “Clubs might have a bigger history and tradition than ours but it is not always the case that they will succeed against you.

“Alex is a big club man and has been since his days at Arsenal. He knows the pressures of a big club and what a big club demands.

“He moved to Barcelona, which he thought was one hell of a move at the time and unfortunately he did not play as much as he wanted to.

“So it is fine being at these clubs but it is not that good if you are not playing.

“He is enjoying his football here and there are lots of pluses.

“Alex has had nothing other than playing for top clubs in Europe.

“Our aspirations are to get there and a player like him would help us, that’s the one thing we can sell him – particularly going to a new stadium with 54,000 people in one of the most iconic stadiums in Europe if not the world.”