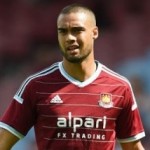 Arsenal and Liverpool have been linked with the New Zealand international defender.

Reid can open talks with foreign clubs in January and West Ham boss Allardyce admits he is worried.

“There’s been talk about Winston and his contract for a pretty long period now.

“It’s not that he doesn’t want to stay. It’s about the financial remuneration and whether they can come to the right level, give or take or negotiation that gets us to a point where he will say, ‘yes’.

“That’s always the hard bit. It’s always a difficult negotiation. If we could tie him up tomorrow then I think the owners particularly and myself would like that and not have it lingering.

“Hopefully sooner rather than later that will come to a conclusion and a positive one. I can only hope that is going to be a positive result in the end.”