Reports are out claiming that West Ham United have moved to re-sign Liverpool fullback Glen Johnson. 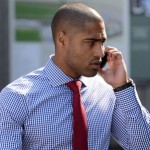 The former England international defender is now a free agent after coming off contract last week.

The Daily Express reported that West Ham are in talks to re-sign full-back Johnso.

Johnson began his career at Upton Park before moving to Chelsea in 2003.

The Hammers are said to face competition from Stoke as well as Turkish sides Besiktas and Galatasaray for Johnson’s signature.