It has been reported that West Ham United are reportedly preparing to increase their bid for Manchester United striker Javier Hernandez. 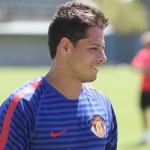 The Daily Star is reporting the Hammers are on the verge of tabling a £12million offer for Hernandez, after the Red Devils turned down their original bid of £8.5million.

West Ham manager Slaven Bilic has made clear his intention to sign another striker before the summer transfer window closes on September 1.

It is understood the North London club are also in the market for QPR striker Charlie Austin. Man Utd to make cash plus Hernandez bid for Falcao