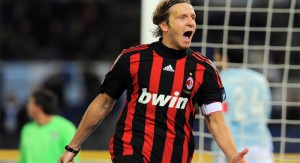 Massimo Ambrosini could be playing in the Premier League next season with West Ham having registered their interest.

Ambrosini is out-of-contract at the San Siro at the end of the season, and was expected to retire after almost two decades with Milan.

However, bucking the seemingly common recent trend, the 35-year-old could opt to extend his playing days in the Premier League, Bundesliga or MLS.

West Ham are thought to be showing strong intentions to bring Ambrosini to Upton Park, with Sam Allardyce keen on utilising the 35-cap Italian’s experience in the game.

“There is interest from West Ham and it’s a real interest, like that of other English, German and American teams, although there have not been concrete contacts,” Ambrosini’s agent Moreno Roggi told Sky Sports.

“But, like every year, the first thing Massimo will do at the end of the season is speak with Adriano Galliani (AC Milan chief).”