Reports are out claiming that West Ham United have snapped up Arsenal U18 captain George Dobson. 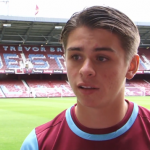 Dobson has signed for West Ham’s U21 squad.

He also featured regularly for the club in the U19 Uefa Youth League and for Steve Gatting’s under-21s in 2014/15.