Reports are out claiming that West Ham United are keeping tabs on Simone Zaza’s situation at Juventus. 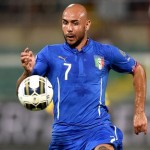 The Italian international striker’s minders held talks with West Ham last month, before he chose to stay with Juve.

But it’s quickly dawned on Zaza that he is well down the striker’s pecking order for Juve coach Max Allegri and a January move has already been raised with his agents.

Arsenal have been linked with a £22 million bid for Zaza this week.

However, should he become available, West Ham are also expected to try again in January.