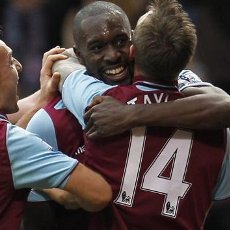 Mohamed Diame ratified a rousing second-half performance by West Ham as he came off the bench to strike the winner in a breathless 3-1 win over troubled London foes Chelsea at Upton Park.

Chelsea were the dominant side in the first period after Juan Mata struck the opening goal on 11 minutes, but astonishingly fell apart in the second period as goals from Carlton Cole (63), Diame (86) and Modibo Maíga (90+1) condemned Rafael Benitez’s side to another horrid day at the office.

Benitez has failed to win any of his opening three games since replacing the sacked Roberto Di Matteo as manager of Chelsea while his new side have not won in the Premier League for seven matches – the club’s worst run in 18 seasons.

The three points handed West Ham fans a much-needed boost after the news emerged before kick-off that striker Andy Carroll had been ruled out for six-eight weeks with a knee injury.