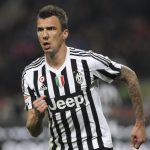 It has been reported that West Ham have made a move for Juventus striker Mario Mandzukic.

West Ham aim to take advantage by swooping for Mandzukic.

His playing time will likely be cut down now that Pipita is coming to Turin and he’d be reunited with ex-Croatia Coach Slaven Bilic.

Juventus will play West Ham in a friendly in London next month, giving them the ideal opportunity to discuss terms.