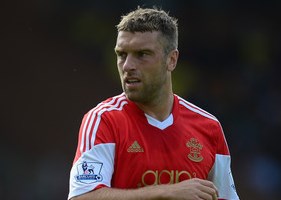 The People claims that Allardyce made enquiries for England World Cup hopeful Lambert in the summer only to be told he was not for sale.

But Lambert has found himself second choice to Saints’ record signing Dani Osvaldo and was dropped to the bench for the recent games against Chelsea and Manchester City.

Allardyce believes Lambert, 32 in February, could be the solution to his side’s scoring problems that have seen them slump to the brink of the relegation places.