Reports are out claiming that West Ham United are closing on a loan deal for Manchester United midfielder Darren Fletcher. 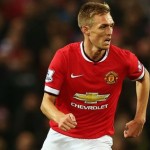 The London Evening Standard says Upton Park manager Sam Allardyce looks set to land the Scotland international with a view to a permanent deal at the end of the season, despite interest from several other clubs, including Valencia and West Brom.

Fletcher has hardly featured at United this season under manager Louis van Gaal and with his current contract due to expire this summer, feels the time is right to seek a new challenge.

The 30-year-old started the first three games under Louis van Gaal but has since been relegated to the substitutes’ bench.

His last start was in United’s 2-0 FA Cup win over Yeovil on January 4.