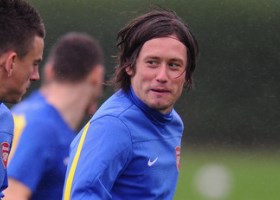 The Czech Republic international comes off contract at the end of the season and needs to prove his fitness to manager Arsene Wenger to warrant a new deal.

Calciomercato.it says Hammers boss Sam Allardyce is a big fan of Rosicky and is ready to pounce should Wenger decide against offering the midfield schemer new terms.