It has been reported that West Ham United remain in the hunt for Manchester United striker Javier Hernandez. 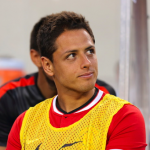 The Daily Star Sunday claims that Hammers boss Slaven Bilic has not given up trying to sign Chicharito from Manchester United.

They are ready to make an improved £12million offer for the striker as they seek a replacement for injured Enner Valencia – out for at least three months with knee and ankle injuries.

They are eyeing QPR’s Charlie Austin but Hernandez, 27, is still in their sights – they have had one offer of £8.5m rejected.