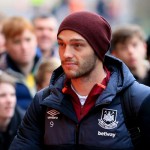 Reports are out claiming that West Ham striker Andy Carroll isn’t giving up on an England recall.

Carroll has not given up on the chance of making Roy Hodgson’s England squad for the European Championships this summer.

Hodgson’s squad for the latest set of friendlies, including Holland on Tuesday evening, did not even include injured captain Wayne Rooney.

But asked if he felt he could still make the squad, Carroll replied: “I don’t see why not. I just need to keep myself fit, work hard at West Ham and hopefully it’ll come.”