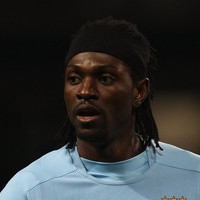 It is believed that the Hammers want Manchester City’s wantaway Togo striker on loan to spearhead their fight for Premier League survival.

And owners David Sullivan and David Gold are ready to bankroll the move to bring the former Arsenal star back to the capital.

An Upton Park insider told The Sun: “It’s no secret Adebayor is unhappy at City so we want to try and capitalise on that.

“Obviously there’ll be big clubs after him in the summer but we have a chance of getting him here on loan.”