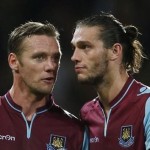 West Ham manager Sam Allardyce has no fresh injury concerns. Defensive duo James Tomkins (calf) and George McCartney (knee) are again likely to miss out for the Hammers, who could climb to ninth in the Barclays Premier League with a win. Mark Noble and Joe Cole will be pushing for places in the starting XI after improving their match fitness from the bench in recent weeks.

Newcastle full-back Mathieu Debuchy will miss the vital match through suspension. The France international was sent off for two bookable offences during last weekend’s 6-0 drubbing by Liverpool at St James’ Park and will sit out the game at Upton Park as a result. Left-back Massadio Haidara has also been sidelined by a hamstring injury, while keeper Tim Krul (dislocated shoulder), full-back Davide Santon (hamstring) and midfielder Sylvain Marveaux (groin) are all still out, although skipper Fabricio Coloccini could return from a long-term back problem.

Sam Allardyce: “I see that Roy Hodgson or one of his coaching staff intend watching Andy Carroll again, perhaps even tomorrow against his former club Newcastle. I don’t blame them – he’s playing consistently well for us. His hold-up play, in particular, has improved and his continued progress is all about us feeding the right kind of ball into him. The big striker hasn’t gone out of fashion. Take Bayern Munich. They have Arjen Robben and Franck Ribery in wide positions providing the service and crossing the ball. Matt Jarvis has also been mentioned recently as a possible for England.”

Alan Pardew: “As far as I’m concerned the group is very much together, pulling together, trying to get a result at West Ham on Saturday. The fact that we have a lot of French players and some language difficulties – working through an interpreter can make understanding certain things difficult – has been torn up and made to be something else but there is no problem. As you would expect after losing like that to Liverpool a lot of criticism has come our way, some of it completely unfounded, left-field and way, way off the mark. But we put a poor performance in last Saturday and we need to put that right… I just find that accusation insulting, if I’m honest. If you think because some of our players are from a foreign country, they’re not bothered, it’s just ridiculous.”