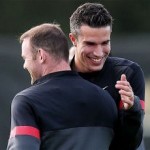 West Ham defender James Tomkins is a doubt for the Premier League clash against leaders Manchester United at Upton Park. Winston Reid (hip) and George McCartney (knee) are also struggling for fitness, so Emanuel Pogatetz is ready to stand in. Midfielder Mark Noble (shoulder) is close to a return, but Joe Cole (hamstring) remains a doubt.

Sam Allardyce: “I think you have to say the (United) team is as good as it has ever been because nobody normally wins the title so easily and by so big a margin, or has this much of a margin at this stage of the season. It is pretty scary what total they might actually finish with. Manchester United have been outstanding and it is been about how their squad rotation has been Sir Alex’s masterpiece as usual, about playing the right team at the right time. I suppose you could say that because they got knocked out of the Champions League a little sooner than usual and because they got knocked out of the FA Cup and Capital One Cup, it has given them the strength and energy to be what they are in the Barclays Premier League this year. They have not had the normal focus on three or four competitions almost to the end, the focus has come on the Premier League and they have just breezed it. They have just gone ‘bang’ and everyone else can’t get near them.”

Sir Alex Ferguson on Robin Van Persie: “There are always going to be question marks from the press – and particularly from the player himself – when a striker hasn’t scored for a few weeks. I know what strikers are like: when they are scoring they think they are going to score all the time, and when they’re not scoring they wonder when the next goal is going to come along. So it was a great goal for Robin [to score against Stoke] in that respect, and hopefully he kicks on from there.”