Reports are out claiming that Mario Balotelli could be set for a Premier League return. 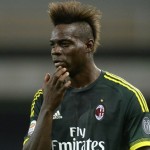 Calciomercato reports that AC Milan are ready to cut short the loan of the Liverpool striker who has emerged on the radar of West Ham United and West Bromwich Albion.

Balotelli has battled for regular game time at the San Siro this season, mainly due to injury, but the Rossoneri are looking to get rid of the constantly underperforming 25-year-old.

It is believed that both the Hammers and Baggies are among the clubs interested in taking Balotelli for the remainder of the season and both are being linked with a pursuit of his services in the coming days before the winter transfer window slams shut.