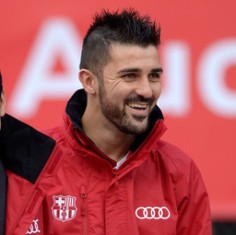 With fears that the top four may be out of their reach and ticket pricing above £60, there is much negativity surrounding the ongoings at The Emirates stadium. With just over two weeks left who can Arsene Wenger look to bring in to give his side a real boost and better chance of making those critical Champions League places? Here are 10 players who the Gunners chief may just have a look at to bolster his squad.

1. Mohammed Diame – With rumours of a £3.5 million buy out clause, Diame fits nicely into Arsenal’s spending budget. The former Wigan man could give the reds much needed steel in the midfield as well as cover for the injury prone Abou Diaby. Diame does not just provide defensive qualities and can drive teams forward with his dribbling abilities.

2. Mapou Yanga- Mbiwa– This French international can give Arsenal much needed versatility in defence. Very capable at right and centre back Mbiwa can also play in holding midfield and very much impressed in Montpellier’s disappointing Champions League campaign. Former team mate of forward Olivier Giroud, Wenger may ask the the target man to convince him that his future lies in North London.

3. Hatem Ben Arfa– There’s no doubt this Arsenal team lack a bit of spark and this could be the man to bring them back to life. Ben Arfa may be frustrating but can be devastating on his day. You only have to look at his form in the second half of last season to see just how much of a game changer he can be. With his stock seeming to have dropped this campaign maybe it’s time for Wenger to once again try and tempt this French winger to The Emirates.

4. David Villa- Already been refused by Barca president Sandro Rosell but a late deadline day move could be possible. Villa is thought to be far from happy with his bench role at the La Liga leaders and with the Catalan giants being so far ahead in the league then they may just be tempted to let Villa leave under the right circumstances. Someone of his finishing qualities and movement around the box could prove the difference for Wenger’s men come the end of the season.

5. Fernando Llorente- The big striker has still not accepted an offer and with his contract running out in the Summer, now could be the time to snap him up. Llorente’s aerial ability and strength means he has the potential do to well in the premier league. He’s now 27 and ready for a big move, which would help him kick on in securing a starting role in the Spanish national team.

6. Wesley Sneijder- Despite having agreed terms with Galatasary it’s been reported that the he is holding out for a better club. Arsene Wenger has always appreciated clever, technical players who play in the number 10 role and Sneijder would be no different. He hasn’t featured much this season and has not been at his best for a while but a move to a club with philosophies of quick passing football could suit the Dutchman. He would however, have to significantly drop his wage demands for this to happen.

7. Wilfried Zaha- This 20 year old sensation has been the star man in The Championship this season and could give Arsenal much needed pace and trickery on their wings. The Londoner is far from the finished article but has the ability to lift fans off their seat and could help turn fortunes around at The Emirates, where home form has been well below par.

8.James McCarthy- Wigan have played some lovely football this season and at the heart of that is a young Irish man called James McCarthy. A deep lying play maker, James is very comfortable on the ball as well as having decent pace and good strength. He was excellent against Arsenal at the DW stadium last month and fits into Wenger’s new policy of  bringing through young British talent.

9. Victor Wanyama – Celtic’s powerhouse could prove to be the perfect signing for Arsenal. The Gunners have some great ball players but could deal with a real Patrick Vieira like figure at the heart of their midfield. Wanyama could provide this, the Kenyan regularly dominates games in The SPL and brought that form into the Champions League, having outstanding matches against Barcelona.

10. Arda Turan– The skillful midfielder has expressed his desire to leave Athletico Madrid and Arsenal could be the perfect club for him. The playmaker could have a similar effect to what Andrei Arshavin did in 2009 when he signed for the Gunners on deadline day and helped guide them to fourth place, with a string of sensational performances. Turan can score incredible goals and has also provided many assists to the lethal Falcao. The reds would have to spend big money on the Turk but if it meant 4th place at the end of the season then it could be worth it.

VIDEO: Samir Nasri Abused by Arsenal Fans as he WALKS to the Emirates!