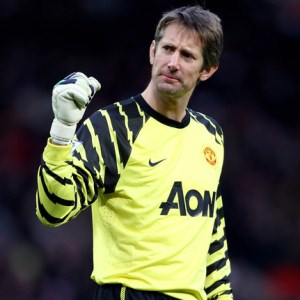 It is the day that all Manchester United fans around the world prayed that would never happen. United’s No.1 goalkeeper Edwin Van Der Sar has announced that he will be hanging up his gloves at the end of the season.

The Dutch goalkeeper joined the Red Devils in 2005 from Fulham for a reported fee of £2 million and has since made 174 appearances for United in all competition.

It is safe to say the it was Edwin Van Der Sar who finally managed to plug the void left by legendary goalkeeper Peter Schmeichel who left Manchester United in 1999.

However, the time has now come for Edwin Van Der Sar to step down and the search begins for the next Manchester United goalkeeper. United currently have Tomasz Kuszczak and new signing Anders Lindegaard as understudy to Van Der Sar but whether one of them will become the successor of Dutch legend is a who different question.

Therefore, we at TFM have compiled for you a list of goalkeepers whom we think can be a worthy successor to the departing Van Der Sar. It is up to you to cast your vote and decide who will be the best candidate to replace Edwin Van Der Sar at Manchester United.

If you happen to know any other goalkeeper that fits the bill, do let us know by leaving your comments and suggestion below. Cheers!