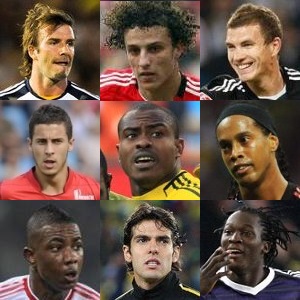 The January transfer window is now open and all Premier League teams are busy buying or selling players in an attempt to finish the season on a high note.

Cash rich clubs such as Manchester City, Chelsea and Manchester United will be looking at high class players with hefty price tags while clubs on a budget such as Everton, Newcastle United and Blackpool will be looking for bargain basement deals and even loan deals to strengthen their respective teams.

Whatever the case may be, these are definitely exciting times for the football fans in general as they wait for their clubs to capture a player or two who cloud make the difference in the second half of the season.

Several high profile names have been linked with a switch to the English Premier League recently. Big names such as David Beckham, Ronaldinho and Edin Dzeko has got the tabloids going crazy with transfer reports and rumours and the fans are buzzing with excitement.

Therefore, we at TFM would like to know which player the fans would like to see play in the English Premier League. We have compiled for you a list of players that are being linked with a move to the Premier League and you can now vote and let us know who you think should play in your favourite football league.

Vote now and find out what other fans think. You can also leave your opinions in the comments section below. Cheers!