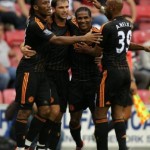 Anything Arsenal can do, Chelsea can do too, as the Blues smash six goals past Wigan who are experiencing their worst start of the season.

Nicolas Anelka and substitute Salomon Kalou both bagged braces with Florent Malouda and Yossi Benayoun also getting on the scoresheet as the champions cantered to their second win of the new season.
Having secured the title on the final day of last season with an 8-0 win over the Latics, Carlo Ancelotti’s side have scored 20 goals in their last three Premier League outings and after two games of the new campaign they boast an enviable goal difference of plus-12.
Wigan, meanwhile, were unable to avenge that drubbing in May, crashing to back-to-back defeats after their 4-0 capitulation against Blackpool on the opening day of this season.