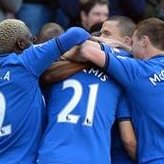 A stunning volley from defender Ivan Ramis put Wigan on their way in the eighth minute, and just two minutes into the second half the Latics doubled their lead as James McArthur rammed the ball home from close range.

West Ham had lost just one of their last six Premier League games, but they looked devoid of ideas as they failed to haul themselves back into the match in a distinctly flat performance with just James Tomkins’s stoppage time header to show for their efforts.

Both managers named unchanged teams as Sam Allardyce kept faith with on-loan Liverpool striker Andy Carroll, who has yet to score for the Hammers, and midfielder Mohamed Diame made a first return to the club he left in the summer; Martinez, meanwhile, was without Arsenal loanee Ryo Miyaichi due to a groin problem.