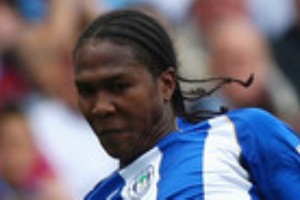 The Colombia international volleyed home Emmerson Boyce’s 35th-minute cross after Dirk Kuyt had needlessly given away possession close to his own penalty area.

Liverpool showed little of the quality required for a place in the Champions League once Fernando Torres had hit a post in the eighth minute and the Latics were well worth their victory.

It was Wigan’s first Premier League win over Liverpool and only their second over one of the so-called ‘big four’ – the other coming at home to Chelsea earlier this season. That ended a run of seven league matches without a victory and lifted them four points clear of the relegation zone.