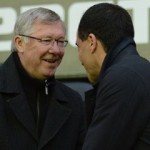 Shaun Maloney curled home a superb second-half winner as Wigan breathed new life into the Premier League title race with a shock 1-0 win over Manchester United at the DW Stadium.

With Manchester City completing a thumping 4-0 win over West Bromwich Albion at the Etihad Stadium, United’s lead at the top was cut to five points after former Celtic forward Maloney skipped to the edge of the visiting box to send a lovely flighted finish beyond David De Gea.

In truth, Sir Alex Ferguson’s side got what they deserved from the match having turned in a listless display for much of the night. Defeat ends their eight-match winning sequence and a 12-match unbeaten run, but they must hope this loss does not have a lasting effect on their bid to defend their title.

United and City have five games remaining of the campaign with United still to visit their city neighbours on the penultimate match of the season on Monday April 30 for a contest that could yet decide the destination of this year’s flag.