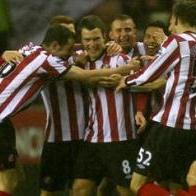 Sunderland continued their resurgence under Martin O’Neill with a 4-1 Premier League win over struggling Wigan at the DW Stadium.

The Latics spent much of the opening 45 minutes in the driver’s seat and hit the woodwork twice in succession, only to fall behind to Craig Gardner’s thunderbolt free-kick in time added on.

James McClean doubled the advantage ten minutes after the break, and though Hugo Rodallega gave manager Roberto Martinez hope of a comeback with a goal seven minutes later, Stephane Sessegnon and David Vaughan wrapped things up on 73 and 80 minutes respectively.

The away win propels the Mackems into the top half of the Premier League table for the first time this season, while Wigan remain adrift inside the drop zone along with local rivals Bolton and Blackburn.