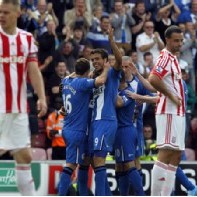 Peter Crouch’s header secured a point for Stoke from an entertaining Premier League encounter with Wigan at the DW Stadium that ended 2-2.

The Latics were 1-0 up just five minutes into the contest thanks to Shaun Maloney’s penalty after Robert Huth had handled in the box, but they then conceded a spot-kick in similar circumstances five minutes before the break, Maynor Figueroa being penalised and Jon Walters converting.

Franco Di Santo’s goal on the break five minutes into the second half put the hosts back in front, but Crouch levelled in the 76th minute to ensure the Potters’ third draw from three league matches so far this season.