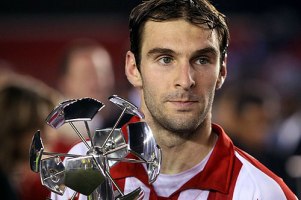 Interesting news are out and it has been reported that Wigan Athletic have completed the signing of Estudiantes striker Mauro Boselli.

The 25-year-old striker has passed a medical at the DW Stadium and agreed terms on a four-year deal.

Boselli arrives in England with an impressive record having netted 32 goals in 57 appearances for Estudiantes.

Wigan boss Roberto Martinez was delighted to have added Boselli to a squad already bolstered by the recent arrival of Paraguay defender Antolin Alcaraz.

“Mauro is a goalscorer, who lives to put the ball in the back of the net and he is somebody we have been looking at for a long time,” he told the club’s official website.

“At 25-years-old he is at a perfect moment in his career to come and play in the Premier League, and he has all the right qualities to make his mark at this level. He is a clever player, a natural finisher who can cause havoc in the penalty area, and he gives the team some great new options with the variety of roles he can play.

“We want him to reach his full potential here and bring plenty of smiles to the Latics fans.”

Martinez added: “These deals with clubs on the other side of the world are very difficult to complete and it has taken many hours of to-ing and fro-ing until everything was settled.”