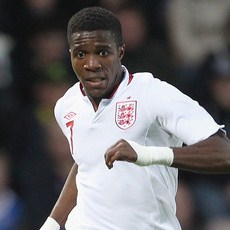 It has been revealed that England coach Roy Hodgson has called up Crystal Palace attacker Wilfried Zaha to his squad.

The 20 year old has been capped five times at Under-21 level and attracted the attention of a host of top clubs including Arsenal and Manchester United.

Now Hodgson has recognised that quality by handing Zaha a spot in his revised squad for Wednesday’s friendly with Sweden.