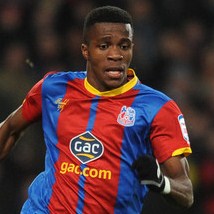 Reports are out claiming that Manchester United are ready to make an opening bid for Crystal Palace winger Wilfried Zaha this week.

The Mirror reported that Zaha sees it as a straight choice between Arsenal and United and he does not want to go anywhere else.

Sir Alex Ferguson will launch an £8million bid for Zaha this week. Manchester United boss Ferguson and Arsenal will go head-to-head in January after Zaha admitted publicly he wants to move to the Premier League.