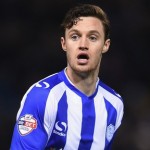 Reports are out claiming that Sheffield Wednesday striker Will Keane hopes for a future with parent club Manchester United.

Keane is hoping his impressive form for loan club Sheffield Wednesday will help him to realise his dream of playing regularly for Manchester United.

“I’ve enjoyed it very much so far,” the striker told manutd.com.

“It’s been good experience for me as, up to now, I’ve been playing in every game which has been pleasing. It’s the reason I came here – to get games under my belt.

“I think maybe this is a bit more like reality [here] because you get caught in a little bubble at United. Only a certain number of clubs have those facilities and you can take it for granted a bit at times. It’s a different experience and something I’ve taken to. I’ve got to enjoy the challenge.

“My aim is to hopefully come back to United and be involved in the set-up there. That’s what I set out to do. At the moment, I’m here until the end of the season and want to give everything here. Hopefully, I can keep playing well and scoring goals and then reassess the situation at the end of the season.”