It has been reported that Sporting Lisbon midfielder William Carvalho is ignoring fresh speculation over his future. 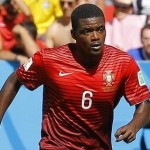 Carvalho is being linked with Arsenal and Manchester United amid Portuguese press reports of a bid arriving on the weekend.

However, the youngster insists: “I hope to have a good season, no injuries, and we can conquer the goals of the team.

Carvalho added: “I still get a shiver every time I play for Sporting.”