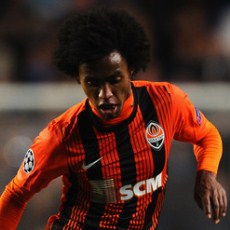 The 24 year old Brazilian international was the subject of a £20million offer from the Blues in the last transfer window but the Ukrainian giants turned down the overtures from the European champions.

The former Corinthians has made it clear on a number of occasions that he is keen to join Chelsea and once again he is of the belief that a move away from Donetsk would be good for him.

“My goal is to play for a bigger club in a high level league,” he told ESPN.com.br.

“If I tell you that I was happy, I would be lying. My desire was there, with a €25million (£20.3m) offer from a big club like Chelsea. I wanted to pack my things and go, but I can’t do that as I am under contract.

“It shows how much Shakhtar like me and shows that I am doing a good job, which is why they wanted me to stay.

“The club know that I want to leave, everyone knows that. The president has told me that he’ll let me go for €30million (£24.4m) and my intention is to sign for a big club.” Essien : I Want To Repay Chelsea With My Performance!