Reports are out claiming that Chelsea boss Jose Mourinho is delighted with their deal for Anzhi winger Willian. 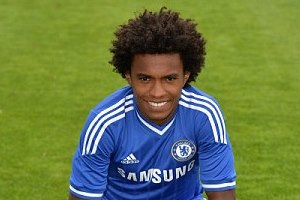 The former Inter Milan and Real Madrid boss described the 25-year-old as a very fast, very dynamic footballer and one who can play in each of the three positions behind the striker.

Mourinho told Chelsea TV: “Willian is a creative player and for his qualities, I think he needs a bit of time to express himself,”.

“Again he is a kid that wanted very much to play for Chelsea and he was too many years in Ukraine and in Russia and now he has his first chance to be in a big championship.”