Reports are out claiming that Willy Caballero has no regrets over his move to Manchester City. 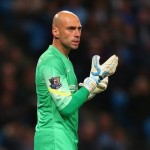 The former Malaga No1 is strictly playing second fiddle to City No1 Joe Hart, but insists he’s comfortable with the situation.

“I have to train like I always have done, so I can be ready for the opportunities that arise. That’s my mentality,” he told pl.dk.

“I am part of a team that has ambitions to win trophies. With my previous club, the target most of all was just being another year in the same league, here I feel young again!”